Another piece of paper:

These were ideas for IAC's Halloween 2003 theme: Software Pirates of the Caribbean

We won second place, which sucked since we built a SHIP in the middle of the department. No. I'm not bitter. Really. Except that we lost to Zombie Survivor. We only lost because we won the year before. We were robbed and everyone knew it. This year we're protesting, but I can't give away the top secret theme yet.

Here's a pic. I'm on the right. That beard was a pain in the booty. Arrrrr! 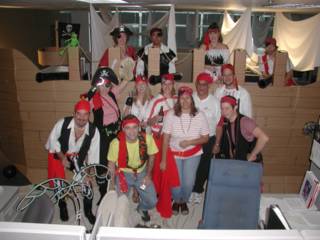 My husband heads straight for craps and generally video poker, my son-in-law heads straight for blackjack. My daughter and I attempt to play together, but she actually likes the video better and I actually like the reels. Playing video along with her this one time, I got sort of|a sort of} free spin bonuses, and it went really well. I stored getting more free spins in the middle of|in bet365 the midst of|in the course of} the spherical, and I had some good winners too.